This is the seventh in a series of blogs that explore the results of the Survey of State Criminal History Information Systems, 2016, a biennial national survey that represents the most current and detailed snapshot of the data, trends, policies, practices, and operations of criminal history records repositories nationwide. SEARCH, with support of the Bureau of Justice Statistics (BJS), U.S. Department of Justice, has conducted these surveys since 1989. BJS published the most recent edition of the survey in February 2018; it provides a snapshot of these systems as of December 31, 2016.
1. Survey Overview
2. New Findings/Warrants/Protection Orders
3. Arrest/Interim Disposition Reporting
4. Disposition Reports: Courts/Prosecutors
5. Mobile Fingerprint Technology/Rapid ID
6. Rap Back/Subscription Notification
7. III/Compact Council/NFF Participation

Since 1998, SEARCH has published information in its biennial survey of administrators of state criminal history records repositories regarding the level of state participation in three national systems and programs:

The Interstate Identification Index is a fingerprint-based “index-pointer” system that is administered by the FBI and in which all states and the District of Columbia participate. As an index, III enables the interstate identification and exchange of computerized criminal history record files of the FBI with the centralized state criminal history files maintained by each participating state in a national system. This system serves as the vehicle for data sharing and integration across the country. It includes arrest and disposition information for individuals charged with felonies and reportable misdemeanors under state or federal law.

Through an electronic inquiry of the Index, criminal justice agencies can determine if criminal history records pertaining to a subject are available in other jurisdictions, and they can identify in which jurisdictions the records can be found. If a “hit” is made against the Index, detailed record requests are made using the subject’s State Identification Number (SID) or Universal Control Number (UCN); data are automatically retrieved from III and each state criminal history repository holding matching records on the individual; these data are then forwarded to the requesting agency. Users can search on a variety of identifiers such as name, date of birth, race, sex, UCNs, and SIDs.

The National Crime Prevention and Privacy Compact was created to facilitate electronic information sharing among the federal government and the states. The Compact authorizes the exchange of criminal history data among states for noncriminal justice purposes when permitted by federal or state law. States that have ratified the Compact are authorized to use the III to retrieve an electronic copy of the record for noncriminal justice licensing, employment, and other regulatory purposes when the subject’s identity has been confirmed by a fingerprint match to the III record. Compact states must make all unsealed criminal history records available in response to authorized noncriminal justice requests.

The Compact was signed into law in 1998 and became effective in 1999 when the first two state legislatures ratified the Compact. By July 1, 2017, 31 states had ratified the Compact. (See green-shaded states in the map.) Twelve other states and territories have signed Memoranda of Understanding (MOU) with the Compact as voluntary recognition or affirmation of the Compact Council’s authority to promulgate rules, procedures, and standards for the noncriminal justice use of the III.[1] (See blue-shaded states in the map.)

The Council meets in a public forum at least once a year at the call of the Chair. A notice of each Council meeting is published in the Federal Register at least 30 days prior to the meeting. The Council typically meets twice a year, in May and November.

The National Fingerprint File is a database of fingerprints, or other uniquely personal identifying information, relating to an arrested or charged individual. The FBI maintains the NFF to provide positive identification of record subjects indexed in the III system. States that participate in the NFF are only required to send arrest card images to the FBI—all dispositions are maintained at the state level, where they may be accessed directly for both criminal and authorized noncriminal justice purposes. By focusing only on arrests, the NFF:

Non-NFF states have the increased burden of ensuring records between the two systems stay synchronized by correcting (often manually) error listings periodically provided by the FBI. Additionally, participation in the NFF allows states to automatically provide the most accurate and complete information in response to all inquiries. 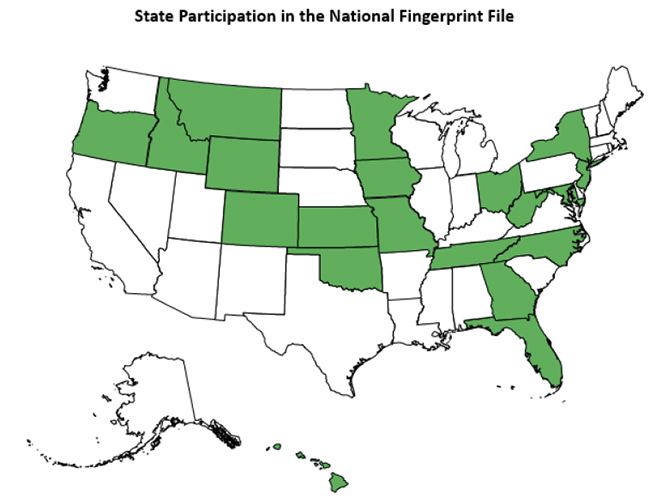 States are making steady and significant progress in improving criminal history records data quality and accessibility. They are upgrading their Computerized Criminal History (CCH) and Automated Fingerprint Identification Systems (AFIS) in response to increasing demand, largely driven by noncriminal justice background checks. Repositories are also assuming greater responsibility for maintaining their own criminal history record information (CHRI) rather than relying on the FBI—moving the country closer to realizing the ultimate vision of III as a truly federated system of record. States are also making consistent progress in maintaining their own protection order and warrant files and entering these records in the National Crime Information Center (NCIC) database when appropriate.

Most states have now also implemented in-state Rap Back services, which allow employers and criminal justice officials to receive notifications when there is new activity on an enrollee’s criminal history record. Rap Back eliminates the need to conduct repeated background checks on persons in positions of public trust and helps ensure that employees serving vulnerable populations remain fit to serve. Rap Back also alerts probation officers and other justice and law enforcement personnel when a person under supervision or investigation is arrested or has other encounters with the criminal justice system.

The value and use of criminal history records continues to evolve; and the technology, policy, and operations needed to sustain these automated records in a safe, secure, and accessible manner mean new challenges for repositories. In this series of blogs, we have only scratched the surface of the information contained in the 2016 survey, but we have tried to highlight key issues that are of practical concern to state criminal history repositories. Additionally, we have attempted to explain the findings in a manner that makes the data meaningful to a wider audience, including many who are consumers of CHRI data who may be unfamiliar with repository operations.

[1] A state may enter into a MOU with the Council, thereby indicating the state’s support of the Compact and Council rules, procedures, and policies relating to the noncriminal justice use of the III without actually ratifying Compact legislation. The approval process for signing an MOU is quicker than the process of ratifying the Compact. An MOU signatory can support all III System purpose codes to exchange criminal history record information in the same manner as Compact signatories. An MOU signatory state does not have a voice in the Council process and may not fully implement the Compact until ratification. (Source: Compact Council FAQ’s, Version 5.2, January 2018)

This organization is a platinum-level GuideStar participant, demonstrating its commitment to transparency.

Past recipients of O.J. Hawkins Award

Statement regarding the Coronavirus/COVID-19 Pandemic
﻿﻿Ongoing actions by federal, state, and local governments nationwide continue to advise citizens and businesses to sharply limit their activities in order to slow the spread of the Coronavirus and the COVID-19 disease. In light of current circumstances, SEARCH is taking these actions, which will affect our Members, staff, and operations: