By Becki Goggins and Karen Lissy
This is the third in a series of blogs that explore findings from the Survey of State Criminal History Information Systems, 2018, published by the U.S. Department of Justice Bureau of Justice Statistics (BJS) in November 2020. This biennial national survey represents the most current and detailed snapshot of the data, trends, policies, practices, and operations of criminal history records repositories nationwide. SEARCH, with the support of BJS, has conducted these surveys since 1989. This blog explores state cite and release practices and statewide citation files.
1. Survey Overview/Summary of Findings
2. New Findings: CCH Repositories, AFIS, and State Message Switches
3. State Cite and Release Practices and Statewide Citation Files
4. Arrest/Interim Disposition Reporting
5. Disposition Reporting: Courts/Prosecutors
6. Rapid ID and Mobile Fingerprint Technology
7. III/Compact Council/NFF Participation
8. CCH Data Quality Audits
9. Rap Back Services

The emergence of the novel coronavirus in 2020, combined with concerns about police use of force, have led law enforcement across the country to make policy changes that reduce the number of people who are physically engaged with the criminal justice system. Reduced physical interaction has been evidenced in the decline of fingerprinting for both civil and criminal offenses, the accelerated release of low-level offenders over concerns for their health, as well as the expansion of policies where arrestees receive a citation in lieu of arrest.[1]

This latter policy, often referred to as “cite and release” (C&R), gives officers discretion in deciding when to formally cite a suspect (i.e., issue a court summons) in lieu of a custodial arrest, which involves taking an individual into physical custody, fingerprinting and photographing them in order to establish or verify their identity, and confining them pending initial appearance, pre-trial release, or bail. Although C&R policies vary by agency, officers typically have guidelines defining authorized and appropriate use.[2]

Cite and release practices became commonplace well before 2020. The popularity of C&R practices was highlighted in a 2016 International Association of Chiefs of Police (IACP) survey, which found that 87% of law enforcement agencies across the country engage in the practice.[3] With the challenges of 2020, anecdotal evidence suggests that C&R has expanded beyond this level.

Citation in lieu of arrest has a number of potential benefits, including improved efficiency (custodial arrests require nearly 1.5 hours of an officer’s time, versus 24 minutes to process a citation), decreased burden on non-violent offenders, and reduced crowding in jails. Law enforcement agencies generally have a favorable (64%) or neutral (34%) perspective on using cite and release.[4]

Over the past several years, criminal history repository managers have anecdotally observed noticeable increases in the use of C&R. As a result, SEARCH asked state criminal history repository managers for the first time in its 2018 Survey of State Criminal History Information Systems how often law enforcement agencies routinely cite and release individuals without taking and submitting their fingerprints to state repositories.

Despite the widespread adoption of C&R policies, the 2018 Survey of State Criminal History Information Systems suggests that considerable geographic variability exists in how often, when, and where they are applied (Figure 1). Variation among states is not surprising, given that previous research found that state statutes were overwhelmingly (>81%) the primary authority under which officers use a citation in lieu of an arrest.[5] 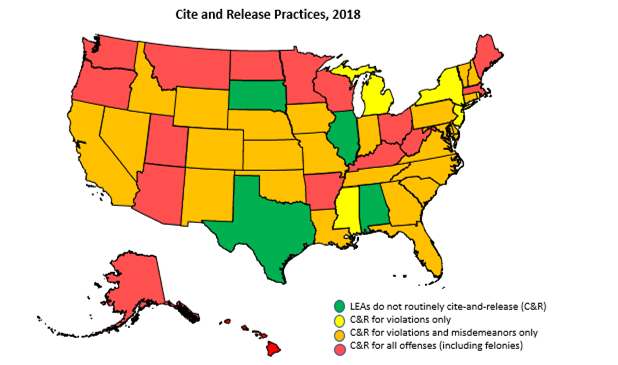 According to the 2018 survey, fully half of the states authorize C&R for both violations and misdemeanors, while another 16 states include misdemeanors and at least some select felonies. In five states (Michigan, Mississippi, New Jersey, New York, and Rhode Island), citations in lieu of arrest are used for violations, and only four states (Alabama, Illinois, South Dakota, Texas), the District of Columbia, and Guam do not routinely witness law enforcement agencies engaging in C&R practices.

Cite and release policies may also have unintended consequences. Limited evidence suggests that C&R arrestees are less likely to appear in court: studies have shown failure to appear rates range from 15.3 to 40%.[6] Since fingerprints are not collected, C&R policies also result in gaps in criminal history records. No arrest record is created if a biometric (fingerprint) identifier is missing[7] and no additional information (such as court disposition data) can be input absent an arrest record. Delays may be temporary (months), but these gaps may also become permanent. In the interim, suspects may commit other crimes while law enforcement is blind to recent C&R arrests.

Several promising technologies have been adopted that may address these concerns about delays and gaps in criminal history reporting.

For example, mobile fingerprint technology (MFT) gives law enforcement the ability to remotely capture fingerprints in the field, enabling them to link a fingerprint of a specific individual to a given citation. Installing livescan devices in courtrooms allows courts to capture and link fingerprints to dispositions, so that fingerprint-based records can be reported to the repository. As of 2018, 32 states and the District of Columbia use MFT for identification purposes,[8] and 13 states have deployed at least 203 livescan devices in their courtrooms.[9] In addition, some courts have offered innovative practices, such as periodic “fingerprinting dockets” that provide fingerprinting services prior to a court appearance. SEARCH Members have reported that this new practice has resulted in increased fingerprint capture. An upcoming SEARCH “Survey Insights” blog will focus on the adoption and impact of these innovations and practices in more detail. 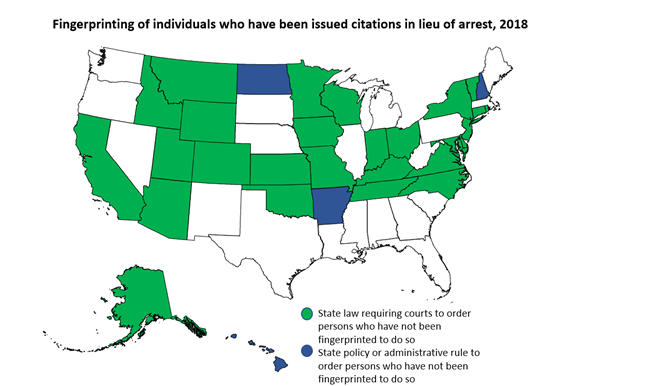 Some states have created statewide citation files to track all criminal citations, which enforce accountability, assure public safety, and generate substantial financial support for the state.

Since statewide citation files offer a way for criminal history repositories to reliably track the number of citations issued in lieu of arrest, more states should consider implementing similar practices. Of course, not all offenses are “fingerprintable.” Most states identify offenses and circumstances in which fingerprinting is required by statute or agency policy, and minor offenses are often exempt.[11]

By tracking how often citations are issued that should result in fingerprints being submitted to the repository, criminal history records staff can work with law enforcement agencies and the courts to develop mechanisms so that fingerprints are captured at a later date to ensure that these records are made available to the state repository.

For over a decade, Utah has maintained a statewide citation file. Law enforcement officers in Utah use an inkpad (or in some cases, a hand-held electronic device) to capture a single fingerprint when a person is cited and released. A copy of the citation and fingerprint image is forwarded to the state criminal history repository to allow subjects to be positively identified when they appear in court.

SEARCH views Utah’s approach as a promising practice that other states may want to explore and possibly emulate.

[7] An exception to this situation is if an individual appears in court as a result of a summons where a judge orders fingerprinting.

[10] For non-criminal justice background checks, statewide citation files most likely would only be available for criminal justice or national security related employment unless specifically authorized by state statute.

SEARCH is open to collaborating on research initiatives to measure and understand the reasons underlying any perceived increase in C&R practices.  If its use is increasing (as has been suggested anecdotally), SEARCH will continue to monitor the effects of C&R practices on all players in the criminal justice system.

Ms. Karen Lissy is a Justice Information Services Specialist for the Law and Policy Program at SEARCH. She guides justice and related organizations in how to: collect, curate, and use NIBRS and CCH/CHRI data for policy analysis and development; craft and implement laws, policies, practices and technology applications for CCH data collection and use, better manage and operate criminal justice information/identification systems; and develop security and privacy policies that protect justice information-sharing systems.

Learn more about SEARCH’s work with criminal history records and the surveys we conduct on CHRI issues.

See our blog announcing the release of the 2018 survey

Check back for 6 more upcoming blogs in this series

SEARCH staff continue to analyze the results of the 2018 Survey with the intention of making the data more accessible by drafting blogs to explain and provide context for the survey findings. If you have suggestions for topics you would like to see highlighted, or if you have specific questions about survey findings, please contact Becki Goggins (becki@search.org) or Karen Lissy (karen@search.org).