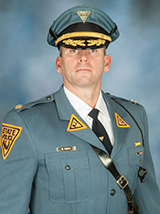 New Jersey State Police Major Brandon F. Gray was elected Vice Chair of the SEARCH Membership Group at a January 7, 2019, meeting of the SEARCH Board of Directors.

The Board met in conjunction with SEARCH’s Winter Membership Group Meeting, held January 8–10 in San Diego, California. The Board’s selection of Major Gray for Vice Chair was by acclamation.

Major Gray will serve out the remainder of the term held by previous Vice Chair Julie Butler, who resigned from the SEARCH Membership Group following her appointment January 4 by new Nevada Governor Steve Sisolak to serve as Director of the Nevada Department of Motor Vehicles, a cabinet-level position.

Major Gray’s term as Vice Chair runs until July 2020.  He has served on the SEARCH Membership since November 2015 and was first elected to the SEARCH Board of Directors in July 2016.