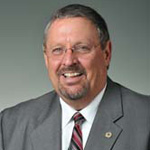 The SEARCH Board of Directors selected Mr. Steingraber for the Award, citing his many contributions to the SEARCH Membership Group in particular and to the justice community in general.

Mr. Steingraber is an At-Large Member of SEARCH and serves on its Board. The Cooper Award is given annually and is SEARCH’s top Membership honor. (See our Awards page for our other annual honors.)

As a senior policy advisor with the National Criminal Justice Association (NCJA), he provides training and technical assistance to organizations nationally in information sharing, including via state justice information sharing technology enhancement webinars.

He has represented the National Governors Association (NGA) on the Advisory Committee of the Global Justice Information Sharing Initiative and served in a leadership role on Global’s Executive Steering Committee between 2008 and 2012.

“The knowledge and field experience David brought to Global’s efforts greatly assisted their goals to support the broadscale, standards-based electronic exchange of pertinent justice and public safety information. Particularly within Global, as in SEARCH, David has been a voice urging his colleagues to focus on fundamental policy and strategic issues.”
—Francis X. Aumand III (Vermont), SEARCH Chairman

Prior to his work at NCJA, Mr. Steingraber served as Executive Director of the Wisconsin Office of Justice Assistance (OJA) as the agency worked to improve public safety through criminal justice and anti-terrorism programs.

Under his leadership, the OJA developed statewide strategies and provided technical assistance and training in—

The Gateway greatly improved justice information sharing among justice agencies in Wisconsin—providing them with access to incident reports and records from other departments that are not included in standard statewide databases, which typically focus on suspects’ criminal histories.  Using the Gateway helped investigators spot crime trends and identify suspects who have been in contact with other law enforcement agencies but who have not yet been arrested—a sign of an offender relocating before local law enforcement can complete an investigation.

Mr. Steingraber was first appointed to the SEARCH Membership in 2003, serving as Wisconsin’s state representative through 2010. He has served as an At-Large Member since 2011, and has served on the Board of Directors for more than 6 years.

SEARCH Chairman Aumand noted that Mr. Steingraber is “also known for always offering us his unique insights and knowledge, and SEARCH has long benefited from his leadership skills.”

The SEARCH Membership will present the Cooper Award at its 2014 Annual Meeting next July in Salt Lake City.