This is the second in a series of blogs that explore the results of the Survey of State Criminal History Information Systems, 2016, a biennial national survey that represents the most current and detailed snapshot of the data, trends, policies, practices, and operations of criminal history records repositories nationwide. SEARCH, with support of the Bureau of Justice Statistics (BJS), U.S. Department of Justice, has conducted these surveys since 1989. BJS published the most recent edition of the survey in February 2018; it provides a snapshot of these systems as of December 31, 2016.

For the 2016 survey, SEARCH added new questions, or slightly modified existing questions, to gather information on emerging information sharing practices. Some of the changes reflected suggestions by users, respondents, and readers. New or modified questions focused on:

The following is a summary of some of the latest survey findings, including a look at protection orders and warrants in state databases and the National Crime Information Center (NCIC).

The term “livescan” refers to both the technique and technology used to electronically capture fingerprint and palm print images without the need for the more traditional ink-and-paper methods. Livescan techniques refer to the way in which operators properly roll fingerprint images to ensure they are of sufficient quality to be accepted by the state repositories and the FBI. Livescan devices are the underlying technology used to collect and electronically transmit digitized images and accompanying textual information to post to a criminal history repository.

Technological advances in fingerprint processing supported by livescan devices continue to produce significant improvements in the quality and availability of information critical to making sound decisions regarding an individual’s eligibility for:

The volume and speed with which fingerprints are transmitted from booking stations in local jails and detention centers and from applicant agencies to a state criminal history records repository enables rapid updating and reporting of criminal record information.

Given the importance of exchanging fingerprint data electronically, SEARCH queries states on their number of backlogged hardcopy arrest fingerprint cards. SEARCH first began asking this question with the 1992 survey. In 1992, 29 states reported a backlog, compared to only 8 states in the 2016 survey—showing substantial progress in reducing backlogs. This progress is largely due to the widespread implementation of livescan devices throughout the country.[1] 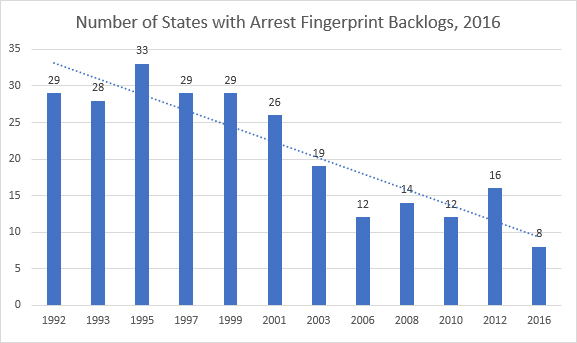 — Entry into State Databases and the NCIC
SEARCH collects information on protection orders and warrants entered into state databases and the National Crime Information Center as a part of its biennial survey. SEARCH has worked diligently with states to encourage them to place protection orders in the NCIC, which makes them available nationally to law enforcement to better protect victims who have been granted protection orders. Placing these records in NCIC also ensures that they are available to support suitability determinations regarding firearm transfers through the National Instant Criminal Background Check System (NICS). As of December 31, 2016, states reported that 91 percent of all protection orders were included in NCIC.

As of December 31, 2016, states reported that 33 percent of all warrants were included in NCIC. The percentage of warrants recorded in NCIC may seem relatively low compared to those housed at the state level. However, it is important to recognize that many of these warrants are for individuals with citations for failing to appear in court or failing to pay fines on non-serious misdemeanor offenses. These offenses are effectively non-extraditable—consequently, they should remain at the state level. This practice of retaining warrants only in state files:

— Timeliness of Entry into State and NCIC Databases
Timely entry of protection orders and warrants into state files and NCIC is important to ensure that the most accurate information is available to law enforcement and other criminal justice officials. Active protection orders also serve as a disqualifier for firearms purchases; accordingly, timely entry of these records is crucial because it helps prevent unauthorized purchases.

As illustrated below, most jurisdictions that track transaction dates report entry of protection orders in both state and NCIC files within 24 hours of receipt, and over 90 percent within 7 days.[2] 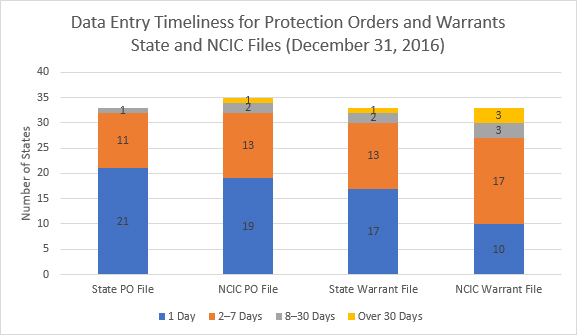 Criminal history records—and felony convictions in particular—are used in a host of criminal justice decisions (e.g., investigations, risk assessments, sentencing) and to determine an individual’s eligibility for certain employment and/or professional licenses. They are also an important element in determining suitability for firearms purchases. Thus, ensuring timely submission of felony dispositions by courts is crucial to having timely and complete information for decisionmaking.

Similarly, it is important that repositories are able to enter felony dispositions into their computerized criminal history (CCH) database and the Interstate Identification Index (III) as soon as possible to ensure that these records are available for both criminal justice and noncriminal justice background checks.

As shown in the graph below: 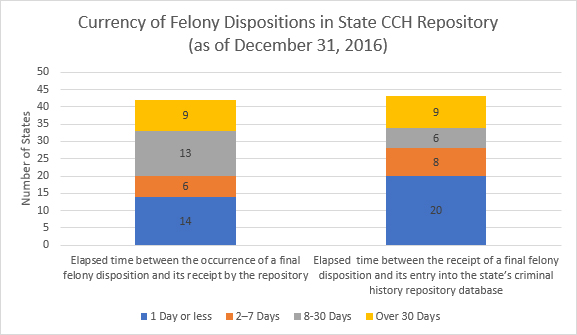 — Felonies
Since 1992, SEARCH has queried states about their ability to flag criminal history records to indicate subjects who have been convicted of a felony. It is not always apparent based on an NCIC code or state statute whether a criminal offense is a felony. Therefore, flagging felony records helps avoid unnecessary delays and follow-up research when deciding an individual’s suitability for employment, firearms purchases, licensing, or certain volunteer positions. In 1992, 30 states had the ability to flag some or all felony records; by 2016, this number had grown to 41 states.[4] 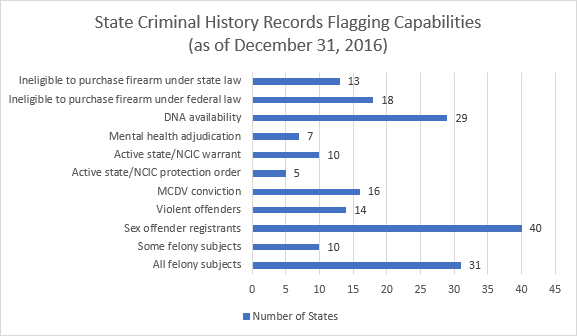 — Firearms Purchase Prohibitions
In addition to highlighting felonies, states are also increasingly able to flag other factors in their CCH databases to make it easier for end users to readily identify certain key pieces of information about a record’s subject without having to read an individual’s complete criminal history record. Many such flags can be used by the FBI NICS Section or state points-of contact to instantly determine whether a person is prohibited from purchasing a firearm.[5] These include flags to indicate:

— DNA Availability
Numerous states require persons arrested for felonies (and in some cases, serious misdemeanors) to provide a DNA sample for forensic analysis. DNA samples, however, can be expensive to collect and analyze and, as a result, many states now employ flags to indicate that a subject’s DNA is available, thereby avoiding the collection of duplicate samples. As the “flagging capabilities” chart illustrates, by 2016 a total of 29 states have flags to indicate whether a DNA sample is available for record subjects.

— Sex Offender Registries
For many years the U.S. Department of Justice has awarded millions of dollars to states to implement the provisions of the Sex Offender Registration and Notification Act (SORNA). Since all states now have sex offender registries, it is quite easy to set flags in the CCH to identify convicted sex offenders, which likely accounts for why it is the most common flag reported by 40 states.

— AFIS
Repositories rely heavily on local agencies contributing fingerprints electronically via livescan to the state’s Automated Fingerprint Identification System (AFIS). Because of this, states must periodically replace these systems as they approach the end of their lifecycle.

In 2016, for the first time since the survey effort began in 1989, SEARCH queried states about plans to replace their AFIS:[6] 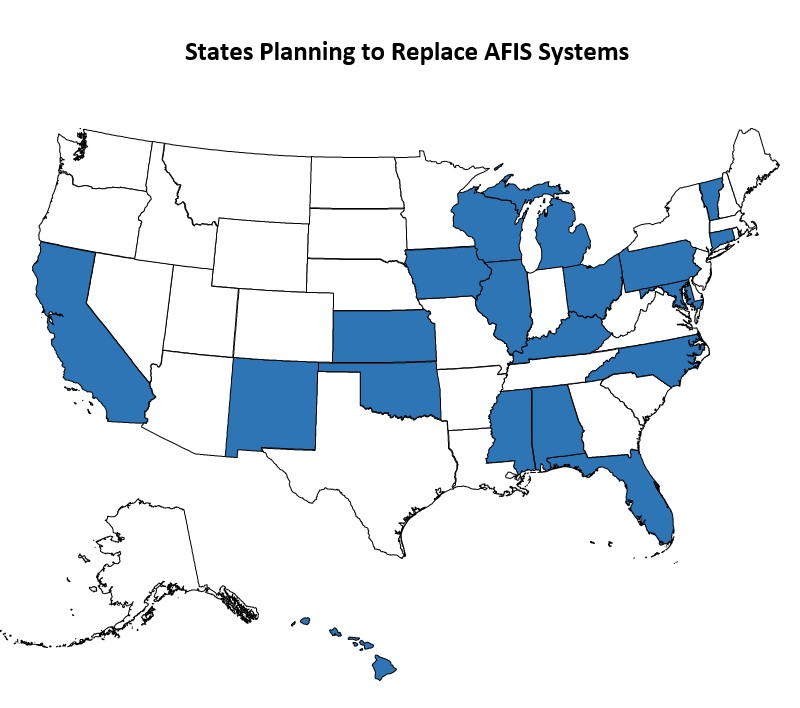 For the 14 states that provided cost estimates, the average AFIS replacement cost was around $6.5 million, though cost estimates varied widely:

— CCH System
CCH system replacements are major information technology initiatives that require significant planning and effort to implement, and typically cost millions of dollars and several years of development, testing, and data migration before launching a production system. As a part of the 2016 survey and for the first time, SEARCH queried states about their plans to replace their CCH system.

A total of 21 states reported that they planned to replace their CCH system in coming years (see blue-shaded states), including 11 states that indicated their intent to begin replacement efforts within the year of the survey or the following year, illustrating perhaps how acute their needs are. (See chart.)

Cost estimates provided by 13 responding states for replacement of their CCH systems varied substantially, ranging from $150,000 in one state to two states projecting over $18 million. Three states projected between $500,000 to $1 million and seven states estimated between $1.7 million and $10.3 million.[7] 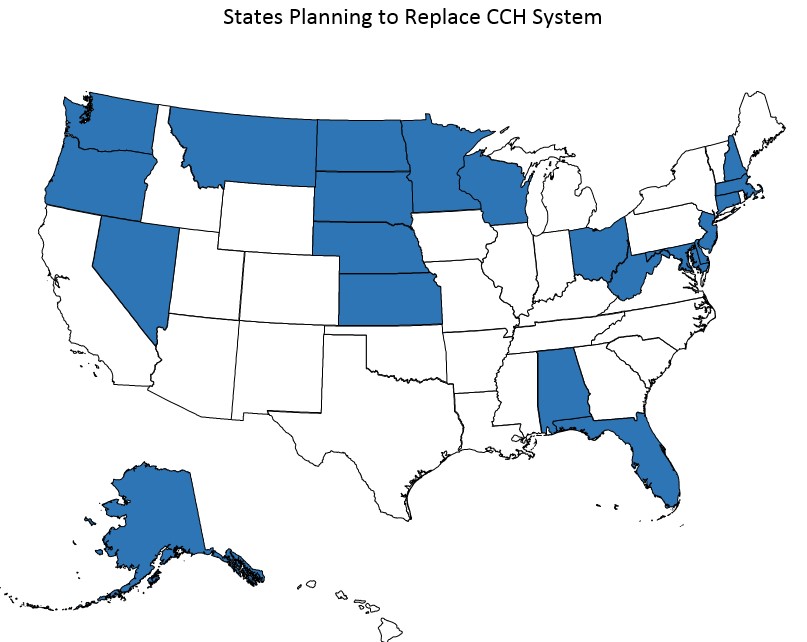 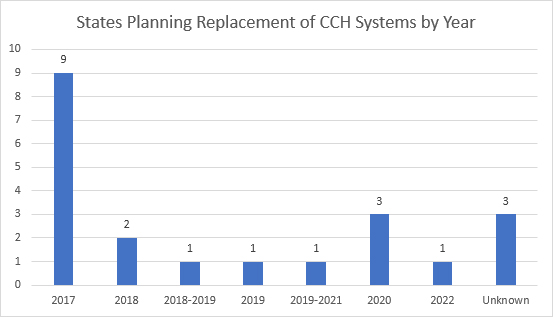 [1] 2014 data are missing because this question was not asked in that year’s survey.

[5] Point of contact (POC) states conduct background checks for some or all firearms transactions rather than relying on the NICS Section of the FBI’s Criminal Justice Information Services (CJIS) Division. See https://www.atf.gov/rules-and-regulations/permanent-brady-state-lists.