This is the fifth in a series of blogs that explore the results of the Survey of State Criminal History Information Systems, 2016, a biennial national survey that represents the most current and detailed snapshot of the data, trends, policies, practices, and operations of criminal history records repositories nationwide. SEARCH, with support of the Bureau of Justice Statistics (BJS), U.S. Department of Justice, has conducted these surveys since 1989. BJS published the most recent edition of the survey in February 2018; it provides a snapshot of these systems as of December 31, 2016.

As a part of the Survey of State Criminal History Information Systems, 2016, SEARCH queried states about their practices related to using mobile fingerprint technology (MFT) and rapid identification (Rapid ID) services. The survey responses regarding these practices are summarized below.

Many local law enforcement and public safety agencies, courts, and correctional and detention facilities use mobile technology to capture and transmit fingerprints to facilitate inquiries of their state criminal history records repository and related justice information systems. These inquiries are used principally to verify or establish positive identification of subjects whose identity is unknown or questionable.

These remote and hand-held devices allow an officer or other criminal justice official to capture one or more fingerprints to positively verify or establish the identity of a subject through state Automated Fingerprint Identification Systems (AFIS) and the FBI’s Next Generation Identification (NGI) System. The devices—which feature fingerprint scanners that are typically about the size of a postage stamp—are commonly used by law enforcement for identification purposes during traffic stops, when serving warrants, or during cite and release events and can even be used to establish the identity of deceased crime or accident victims. Courts can use them to verify the identity of defendants appearing before them at critical events, such as sentencing, and correctional agencies often employ the technology to verify the identity of inmates at intake, booking, transfer, and release.

As of year-end 2016, 30 states and Puerto Rico reported using mobile fingerprint technology for remote identification and booking purposes, as illustrated in the map.[1]

In addition to establishing identity with biometric precision, mobile fingerprint readers have other advantages: 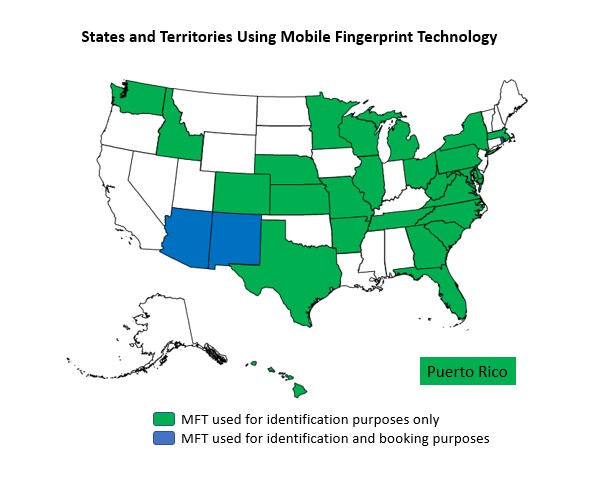 Rapid ID also allows authorized users to search the FBI’s Repository of Individuals of Special Concern (RISC), which was introduced in 2011, and is accessible to law enforcement officers nationwide. The search, which is conducted through the FBI’s NGI system, promotes officer safety and situational awareness by providing on-scene access to a national repository of wants and warrants. RISC searches also return data from the NCIC Immigration Violator file, the Known or Appropriately Suspected Terrorists file, and information concerning convicted sex offenders.[2] 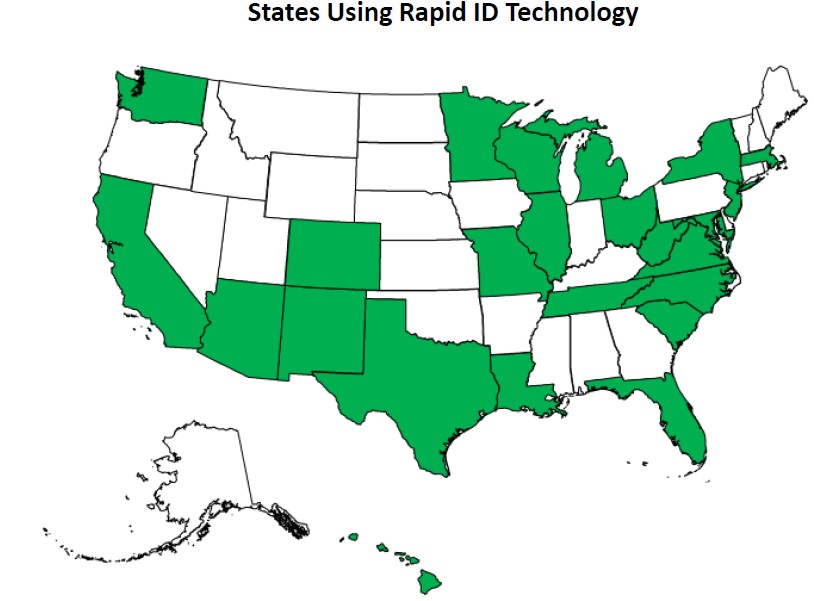 States that have deployed Rapid ID conducted nearly 2 million searches in 2016, which produced more than 1.1 million “hits” or positive identifications.[3] The numbers vary widely from state to state, which possibly reflects variations in how broadly the technology is deployed and the operational context in which it is deployed. In correctional facilities, for example, MFT and Rapid ID technology is often used to verify the identity of inmates when they enter and exit the facility, and at various points when inmates—

Similarly, probation and parole clients might have their identity regularly confirmed as they seek and receive various services and meet with their case manager.

[3] See Table 11e in the 2016 Survey. A “hit” is a positive database search response to a Rapid ID inquiry that is conducted using a subject’s fingerprints.