This is the fourth in a series of blogs that explore the results of the Survey of State Criminal History Information Systems, 2016, a biennial national survey that represents the most current and detailed snapshot of the data, trends, policies, practices, and operations of criminal history records repositories nationwide. SEARCH, with support of the Bureau of Justice Statistics ((BJS), U.S. Department of Justice, has conducted these surveys since 1989. BJS published the most recent edition of the survey in February 2018; it provides a snapshot of these systems as of December 31, 2016.

As a part of the Survey of State Criminal History Information Systems, 2016, SEARCH queried states about their practices for receiving disposition information from courts and prosecutors. The information presented in the survey provides a snapshot of the number of dispositions received and how state criminal history repositories process them.

In their responses, 50 states, Guam, and Puerto Rico indicated that more than 12.6 million final dispositions were reported in 2016—a 3% increase from that reported in 2014.[1] Once received, state repositories seek to match these dispositions to fingerprint-supported arrests in their criminal history repository. If no corresponding arrest can be located, states will typically place the disposition into a “suspense” file, so the disposition can be added when and if the arrest record is submitted. State repository staff may also contact local law enforcement agencies to see if they have arrests on file for corresponding dispositions where no state-level record exists. Additionally, nine states reported that they have deployed livescan devices in courtrooms to capture fingerprints to allow dispositions to be added to the criminal history record.[2]

The FBI defines “disposition” as “an action regarded by the criminal justice system to be the final result of a committed offense.” While the most common dispositions are court findings (e.g., guilty plea and placed on probation, acquitted, etc.), a disposition can also indicate that law enforcement elected not to refer an arrest charge for prosecution or that the prosecutor amended or dropped an arrest charge. For a list of common disposition types, see the Warrant and Disposition Management project website

Since most disqualifiers for employment, licensing, volunteer work and firearms purchasing are based on convictions, it is important that the final dispositions from courts are tied to the individual and the originating arrest charges in state or federal criminal history information systems. This is equally true whether the final disposition is a conviction or an acquittal. As the map illustrates: 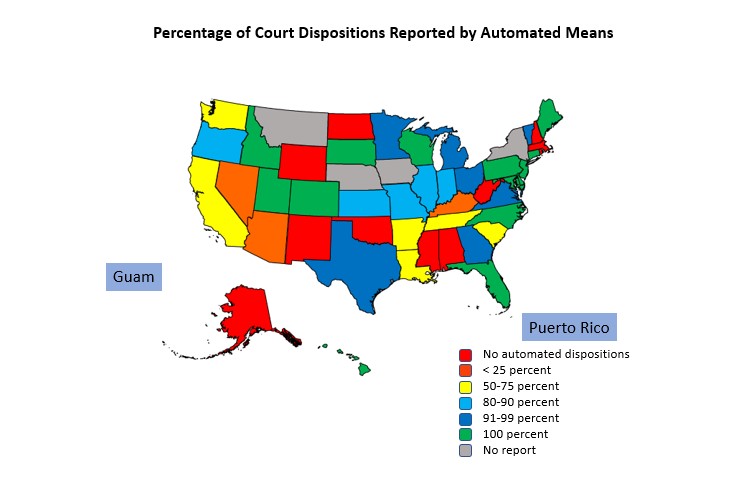 Prompt disposition reporting is essential to ensuring public safety. Conviction for a felony and for certain misdemeanor crimes of domestic violence or drug charges can render a person ineligible to purchase a firearm under federal law. If the conviction is not reported in a timely fashion, it is possible that a convicted person could obtain a firearm given current operations. These types of convictions are also used to deny persons access to positions of public trust and working with vulnerable populations—such as children, the elderly, the ill, and persons with disabilities. Conversely, if a person is effectively exonerated by a court’s final disposition, timely updating of the criminal history record to reflect this fact will not hinder their ability to serve in a trusted capacity, secure certain professional licenses, or purchase a firearm. 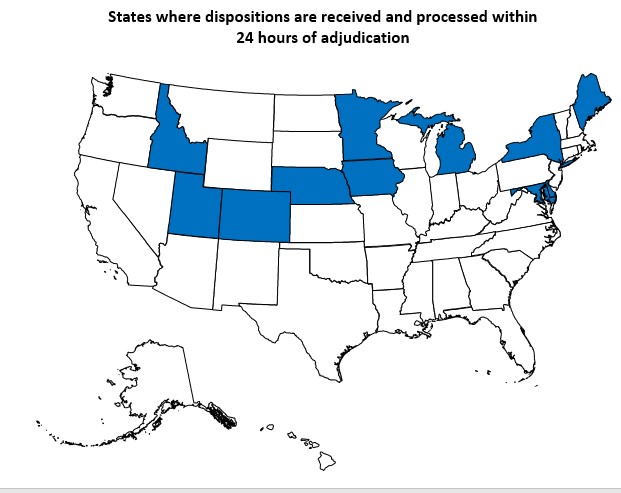 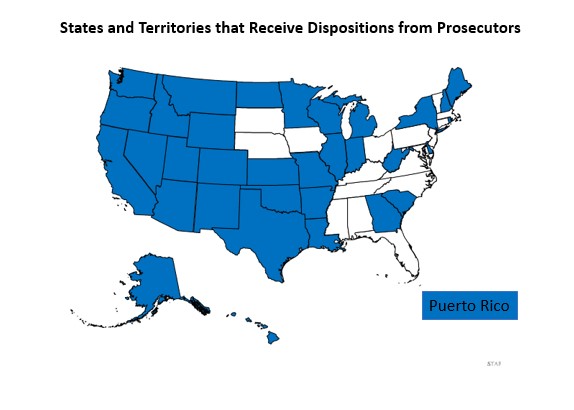 As with courts, electronic data submissions result in the timeliest entry of records into the state criminal history repository: